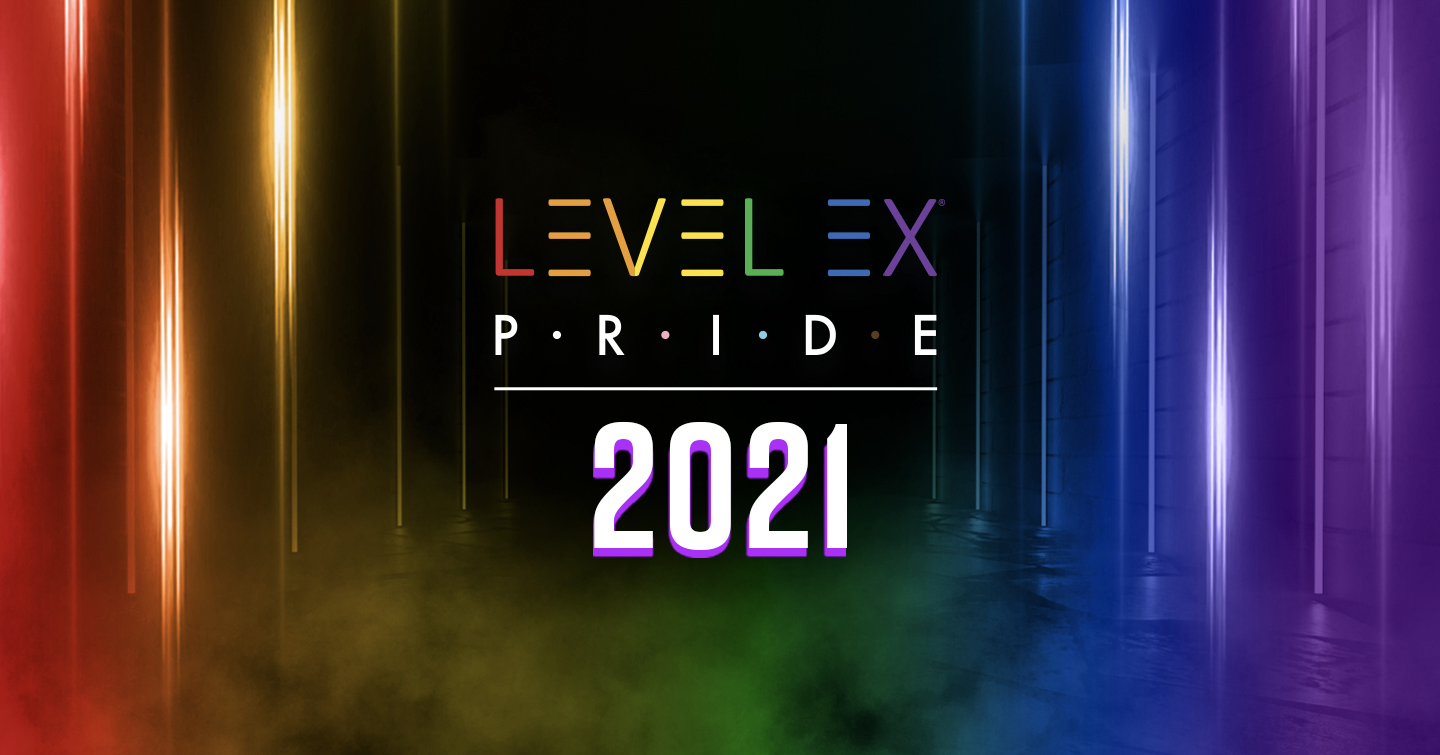 “The Level Ex community helped me to not only accept myself and have pride in who I am, but also to learn about a side of my own culture that I had previously never claimed or experienced.” —Nicole Loud, Game Designer

At Level Ex, we don’t just wave flags or post rainbow logos during Pride Month, we create a safe space for dialogue, activism, education, and allyship. An open, welcoming community and secure sense of belonging are essential parts of our culture.

Last year we recognized developers and designers who are revolutionizing LGBTQIA representation in the video game industry. This year, we broadened the scope. “Our goal is to fight stigma and prejudice, provide support, educate the public, and advocate for policies that support LGBTQIA individuals and the impact they’ve made locally, nationally, and internationally…and have some fun along the way,” said Kami Bond, Head of People and Culture. Level Ex’ers from different teams across the company volunteered to be culture ambassadors and came together to plan a month of thoughtful and thought-provoking events that placed as much importance on education as they did on celebration.

Activities opened with a video documentary, Stonewall Forever, which offered an in-depth look at the LGBTQIA experience during the 60's and 70's in the United States, focused on the Stonewall Uprising of 1969 universally acknowledged as the catalyst of the modern queer rights movement. One Level Ex’er commented, “I am ashamed to admit how ignorant I was/am about Stonewall and all these events leading to Pride month. Thanks so much for sharing this, and I still have more to learn!” “Most of us never got any education about LGBTQIA issues in our formal schooling unless we specifically sought it out in higher education. Even many members of the community itself haven't learned much about the movement's history,” MJ explained. “I think many folks were surprised both about how recently major milestones like decriminalization of homosexuality in the US were achieved, and how early community progress was wiped out by the rise of fascism in the early 20th century.” They continued, “Learning history is the only way that we can put into perspective how far we've come, but also remember how fragile this progress can be if we become complacent.”

Level Ex’ers encouraged one another to stay involved and connected by creating a crowdsourced internal resource page with links to LGBTQIA organizations, support networks, and sources for continued reading and education. Senior Graphic Designer Mazen Ghamlouch helped coordinate this effort. He said, "When you’re gay, bisexual, transgender, or gender-nonconforming, an average day for you is not the same for me. Some often face struggles and obstacles I can’t imagine, so I choose to speak up and advocate because it’s the human thing to do. Until the day comes when we can all live out similar ‘average’ days, I’ll continue to support LGBTQIA communities everywhere."

We also had the opportunity to hear from fellow Level Ex’ers, who shared their personal reflections and experiences. Game Design Lead - Client Success, Roxanne Splitt, echoed Nicole’s earlier sentiment about feeling a sense of belonging at Level Ex: Game Director Bill Sabram stressed the importance of civic involvement and engaging others in open conversation—even if the topic is uncomfortable to some. Nicole Loud summed up the power and impact of belonging to a community that openly shares their personal experiences: “It has inspired me to actively contribute to that same sense of pride and community so that others can feel as accepted, understood, and supported as I did.”

It should come as no surprise that we put a Level Ex spin on our Pride Month activities. Games like trivia and bingo let Level Ex’ers learn more about how they can support the LGBTQIA community while having some laughs along the way. Trivia revealed surprising facts—some fun, some sobering. Do you know which member of the “Overwatch” roster identifies as part of the LGBTQIA community or how many states have banned conversion therapy? Blizzard and 20...our minds were blown, too.

Putting her game designer skill set to good use, Roxanne created a bingo game highlighting aspects of identity, influential figures in LGBTQIA and moments that matter in the history of Pride. Roxanne said, “My goals were to teach and inform by triggering ‘A-ha’ moments that could serve as a launchpad for future discoveries, have fun with a mix of joyful and celebratory moments —in addition to the more somber ones, and, most importantly, share the Level Ex spirit by featuring the thoughts and experiences of the people who work here.” The rich mosaic of voices, backgrounds, and ideas that came together in this month’s events to create one harmonious celebration serves as a reminder of the true meaning of pride: inclusivity, diversity, and unity. Thank you to our culture ambassadors for making this year’s Pride Month so memorable! Want to work for a company and a cause you can be proud of? Check out our open positions.